These dogs are something else.  They are not at all what I’m used to as I grew up with labradors and generally prefer big dogs.  These are not big.  There’s a small one and a smaller one, and they definitely have a pecking order according to size as the small one defers to the larger one.  But when it comes to walking the smaller one knocks spots off her sibling.  She’s a long-haired miniature daschund and she beetles along, straining at the leash, legs scuttling furiously and long-haired ears streaming in the wind.

I was unsure about whether I could combine my walking needs with those of the dogs as I’d want to go further afield; but I needn’t have worried.  Apparently they’re good for a ten-mile hike which is probably as much as I’d ever want to do.  Today was a much gentler stroll down the road (and I mean down) to tiny place called Kentchurch which consists of a couple of houses, a hen-box and a pub (the one I told you about before with the sign showing the man and the devil).  I met the hen-lady on the way back and asked if they usually have eggs as I hadn’t brought my purse.

It’s a terribly laid-back way of life down here.  Nobody locks their doors and there’s hardly any traffic.  What there is, is mostly farm vehicles or visitors to the castle.  I walked the dogs there yesterday as you can go all the way round without climbing on the ramparts. 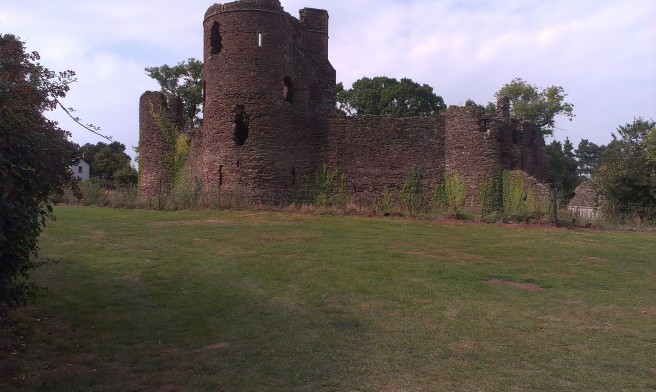 I can’t find a photo of the dogs so I’ll have to upload it later.  Time to sort out the fuel and wood situation and make pizza!