Today I am spending the entire day honouring the memory of Leonard Cohen; poet, singer, guitarist and songwriter (1934-2016).  Although his death wasn’t announced until Nov 16th, he actually died on 7th, so it was one year ago today that we lost him.

Here’s how I found him.  It’s 1972 and I’m in a schoolroom in West London.  We are awaiting an English lesson when in comes a student teacher followed by a caretaker carrying a record player.  Great excitement: we rarely have music in class.  The teacher puts on the record and says, ‘we’re going to listen to this song and then discuss the lyrics.’  The guitar sounded, the voice began – and I was lost.

In those early days his voice haunted me like a busker on the underground, seeming to echo from afar down a long, dark tunnel.  But from the first inoculation he was in my blood, and there was no getting him out.  Vast wastes of emotion opened up in me: here was a way to link god and sex (which the church had cast asunder) here was a landscape of sublimity and pain – above all, here was one who was not afraid to stand and open his heart for all to see.  I loved that in him, as so many did.

Leonard was not a whole man, and he was unafraid to tell us so: the word ‘broken’ seemed to resonate through his early work where despair often won out over exaltation.  Whirled by winds of ‘deep distress’, he landed on Mount Baldy, a Zen monastery outside Los Angeles where he woke before dawn and walked through the snow to sit, silent and shorn, in meditation:

Since he never spoke, the other monks knew him only as zhikan, ‘the silent one’, having no idea that outside the monastery he was a famous singer.  But then, Cohen had so many incarnations: poet, Cuban revolutionary, Scientologist (‘did you ever go clear?’) Jew, Zen Buddhist, prophet and guru – and those are only the ones I know about.

And as for me, what can I tell you, my brother, my killer?  How can I possibly explain what Cohen meant to me?  I loved the openness in him, the way he never put on a front or pretended to be other than he was.  I loved the way he pursued each line of a song, even to the point of crawling across a hotel bedroom floor at 3 am trying to get it right.  And most of all I loved the way he treated his audience.

For Cohen, tours were not so much a way of promoting a record (though they were of course that) as a kind of reconnaissance, a way of experiencing the zeitgeist.  He had a great respect for his audience and in concerts he gave his all, dispensing with a support act and doing encores which sometime stretched out as long as the main set.  The last time we saw him, though he looked so much older, he skipped off the stage at the end: he was then 75.

And yet in those early years I suffered for his art.  Like other disciples before me I was pilloried in public for my allegiance to Cohen; I was mocked and jeered at.  The ‘grocer of despair’ was too easily dismissed as the bard of the suicidal (‘one hand on my suicide’) by those who never glimpsed his beauty.  As for Cohen himself, in those early years he was described as having ‘the stoop of an aged crop-picker and the face of a curious little boy’ but with meditation the stoop went and by and large he aged well, still looking good right into his sixties: 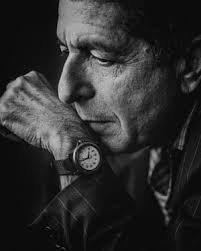 In public Cohen was courteous and dignified, refusing to hit back at his critics or fight rudeness with rudeness.  But, though many consider him a sort of guru, Cohen was no saint; and his Achilles heel was women.  He did go through a period of celibacy at Mount Baldy, but in general seemed unable to stop pursuing women; and not limiting himself to one at at time either: Jennifer Warnes once sadly remarked that she never had a relationship with Cohen because she knew it wouldn’t be exclusive.  From the outside it appears that he never found lasting happiness or stability in relationships: his early affair with the Marianne of the song seemed a brief oasis in a stormy life; a storm which escalated into a crisis when his agent Kelly Lynch stole $5m and left him penniless.  Cohen showed remarkable public forbearance in the face of such devastation: all he would say was, ‘we understand that these things happen.’  But though we felt for him we were also delighted because a career which had seemed dead and buried was resurrected: Leonard was on the road again.

He continued recording almost to the day he died: his final album, ‘You Want it Darker,’ was released just 19 days before his death and recorded with difficulty.  In the end his son Adam had to stick a mic on a desk and into this Leonard breathed his last songs.  They do not, of course, have the vigour of his earlier work, but are nonetheless infused with a bleak beauty.

No, Cohen was no saint: but he was a prophet of sorts and for me a kind of paradoxical guru.  Leonard never would have wanted to be anyone’s guru: I never wanted to have a guru.  It’s the perfect relationship; and for me he will always be a guiding voice; bleak, sublime, courteous and above all, to his own self true.

If you want to know more, here’s the official site:

and here’s my blog post about that concert in 2008:

RIP Leonard, we love you.