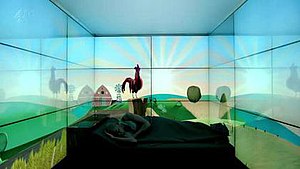 As the whole world knows, there are two types of Blue Peter badge; an ordinary one which you get for sending something into the programme, and a gold one which is awarded rarely for something special – like saving a life.  Such is the Mary Poppins–like image of Blue Peter that it came as a great surprise to me to learn that not only is there a silver Blue Peter Badge but also that Connie Huq – the longest-running presenter of the programme – is the partner of Charlie Brooker, creator of Black Mirror and the sneering anchor of a series of news satire programmes collectively known as ‘Wipes’.  Not only that, but Huq co-authored one of the best Black Mirror episodes, ’15 Million Merits.’  This takes place in a future world where work and its rewards are virtual: those at the bottom of the heap ride exercise bikes which power the TV series that everyone else watches.  It’s the ambition of every biker to get on one of these programmes.  Sound familiar?

I can’t be bothered to review the programme here, especially as OH has done a much better write-up:

And whaddayaknow?  I thought I was just being cute combining Blue Peter with Black Mirror, but there actually is a Black Peter.  In the folklore of the Low Countries he is the companion of Santa Claus: I had a picture prepared but I strongly suspect it’s a white woman blacked up, so I’m posting this one instead.  I will, however, post a link to today’s radio 4 ‘Point of View’ which is about ways in which we police ourselves: