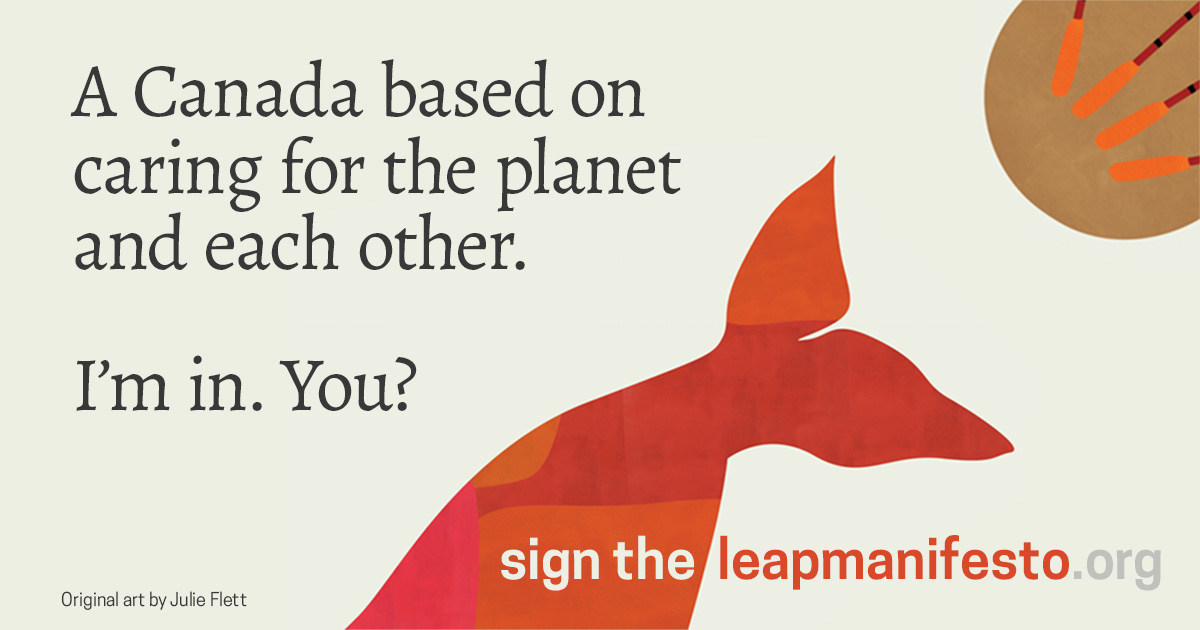 As I said yesterday, I’ve just finished reading ‘No is Not Enough’ (actually I have yet to read the end bit, which is the LEAP manifesto pictured above, an alternative manifesto with a number of broad-ranging suggestions to tackle climate change and deal with the excesses of global capitalism.  It refers to Canada but is applicable anywhere and everywhere.)

Klein hits the nail on the head, as always, by pointing out that attachment to money is at the root of this; and without coming over all biblical manages to say the same thing as the New Testament:

Money itself, as I have pointed out before, is neither real nor evil in itself.  It is morally neutral since money is a concept we have agreed to treat as if it were real for the purposes of exchanging goods and services.  So it strikes me that the way to destroy global capitalism (which god knows we need to do before it destroys us) is to undermine this attachment to money.  We can do this in any number of ways: by freecycling, by refusing to buy what we are sold, by helping each other out without asking for financial rewards and above all by refusing to regard money as the be-all and end-all of our existence.

For ten years now I have put my money where my mouth is by giving up paid employment in order to do what I love.  I have taken a leap off the cliff and tried to do the impossible – namely, to make money from writing – and I can’t claim to have succeeded yet.  But – and here’s the astonishing point – I have survived.  My health has not gone down the tubes; I haven’t starved, gone without adequate clothing, frozen to death or been homeless.  Whenever disaster has threatened to strike something has always come along: I’ve even managed some luxuries such as holidays, the odd bottle of wine and, in the last year, a car.  Much of this is due to the generosity of friends (and Friends) and family, but I hope those (F)friends and relatives would agree that there has been some kind of exchange here: in that I may not have money but I have time and energy to do things for others.

This is a phenomenon I’ve observed in other people who put their lives on the line to do what they love; that something always turns up.  I don’t even think you need to have some kind of religious faith for this to work; just the faith that comes from taking that leap off the cliff.  Every artist (unless they are born into money) has this same dilemma: how do I make a living and practise my art?  My view is that if you wait until you can afford it you’ll probably wait forever.  Take a leap of faith.

Living without money has taught me a lot.  In some ways it’s been a very hand-to-mouth existence but I think that central to survival is to think only of what you need today, here and now, and let tomorrow take care of itself. It has also brought a certain kind of freedom: an immunity to advertising.  There is no chance whatsoever of any advertising affecting me or tempting me to buy something I don’t need, because I don’t have the money.

At the same time I refuse to allow lack of money to limit my imagination.  I never tell myself ‘I can’t’ when an opportunity comes up, because maybe there’s a way that ‘I can.’  For example I can go to the Labour Party Conference in September because I’m going as a delegate and this will be paid for by the local party; and in the same way I’ve managed to go to lots of things for free because I’ve managed to access funding or because I’ve offered to do something in return.

It’s amazing what can happen when you look beyond the limitations of mere money and take a LEAP.