Lacking a proper holiday as yet, I decided this week to have some days out and go walking.  I started by accompanying the River Soar from Loughborough up to Normanton-on-Soar, a distance of little over three miles, where at weekends a chain ferry plies the water and takes you across to the village.  It’s a lovely place with a 900-year-old church (the ferryman is also the organist and told me they’d just refurbished the organ at a cost of £40,000) a community shop and a decent pub.

The next day I drove to Zouch (pronounced zosh) a village just north of Normanton, where I parked up by the water and carried on.  This was a surprising walk as it remained peaceful and beautiful despite the proximity of the A6 and the occasional plane descending towards East Midlands airport: I followed the river’s course, exchanging greetings with boating folk and having lunch at a delightful picnic table under the trees.  I made it as far as Kegworth, a return journey of nearly 9 miles, and had nearly dissolved into a sweaty puddle by the time I got to the pub in Zouch.  Inside was muggy but ah! there was a tiny terrace by the river so I took my rapidly melting iced water out there but alas! I was eventually dislodged by a pair of blokes trying to turn a boat round without actually getting into it.  Annoying.

Then yesterday I decided a theme had begun, so parking up at Kegworth I started where I’d left off and followed the Soar all the way up to its demise, the point where it pours into the river Trent.  The Trent is one of the great rivers of England and I was looking forward to sitting by the lock and watching it go by.  But sod’s law was in operation: the footpath was on the wrong side and in order to get to the right side you had to walk several miles further on, cross a bridge and then come back again, performing the whole operation in reverse in order to get back to where you started.  It being hot once more, I declined.  I sat in the only spot of shade for miles around and ate my sandwiches, then I turned and walked back, resting in every bit of shade I found.

Thank goodness for a change in the weather, for today was perfect for walking; just enough sun, plenty of cloud and a fresh breeze.  Today I abandoned the river and went South, hopping on a steam train from Loughborough Great Central station.  The Great Central Railway is an impressive venture and runs all year round: 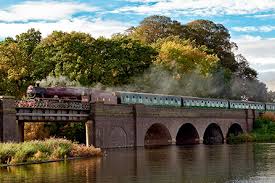 down to Quorn where I intended to walk to Swithland Reservoir (pictured above).  But either the footpaths were not marked at all or they were partly marked, or else what mostly happened was a helpful yellow arrow telling you there was a path but not where it might be going.  Even a hint would have helped.  A riddle, perhaps: ‘like your water in reserve?  Here’s the area that will serve’.  You know, something like that.  But no.  Result: I went the wrong way and ended up in Woodhouse Eaves instead of at the reservoir.  Not a problem, I just couldn’t figure out where I’d gone wrong (should have taken an OS map.)  Anyway, I tramped back over the fields, encountering some other hikers who were also searching for the path to Swithland.  Then I saw a sign saying ‘Footpath to Quorn, 11/2 miles.’  Great, I thought.  I can’t go wrong here.

Mistake!  The path ran on merrily for a couple of miles before grinding to a halt in the middle of a farm.  No signs, no path and no-one to ask.  Muttering grumpily about rural signposts I retraced my steps and went back by the road.  But! it has been borne in upon me that Leicestershire abounds in beautiful walks if you know where to look.

What’s on the agenda for tomorrow?  I have no idea – but I know it’ll be good.

I’d like to post a series of helpful maps but you’ll have to make to with this picture of Zouch: