A steadier 6.4 miles (10.3 km) today, having outdone myself in a 14-mile walk yesterday.  I’d set out for Barrow-on-Soar (site of the famous Trident decommissioning, of which more anon) deciding to go further if I felt like it.  Once you get past the outskirts of Loughborough with the factories backing onto the canal, it’s a pleasant walk along the canal to where it joins the river Soar.  The canal and the river play hide-and-seek all the way up: sometimes they run together and sometimes the river meanders off for a bit while the canal takes the straighter route.  It’s all quite confusing and can result in much consulting of maps, phones and compasses in order to determine which bit of which wiggly blue line you are actually on.  I’ve been assembling my walking kit bit by bit and now have OS maps, water bottle, thermos, lunch box, cagoule (it did actually rain today) and hand sanitiser.  These will shortly be joined by a shewee, of which more anon.

So once I got to Barrow I texted Jan to see if she was there and she wasn’t, so I carried on towards Mountsorrel.  This is another bit where the river meanders while the canal takes a straighter route; however it wasn’t all that straight and managed to describe several sweeping bends before finally arriving in Mountsorrel.

Here a strange sight awaited me: slap bang on the side of the canal was a small and very new estate of houses, but they were all so weird and silent and shut up and the place was so empty of any life that it felt a bit like being on the set of The Prisoner.  It was an odd contrast to the rest of the village which is a bit run-down but basically well-meaning.  On I trudged to my destination, Sileby Mill Lock,

where I chatted to some volunteer lock keepers who tried to press me into volunteering and rhapsodised about the attractive 1860 bridge which used to carry a railway and now stands adorning a field. 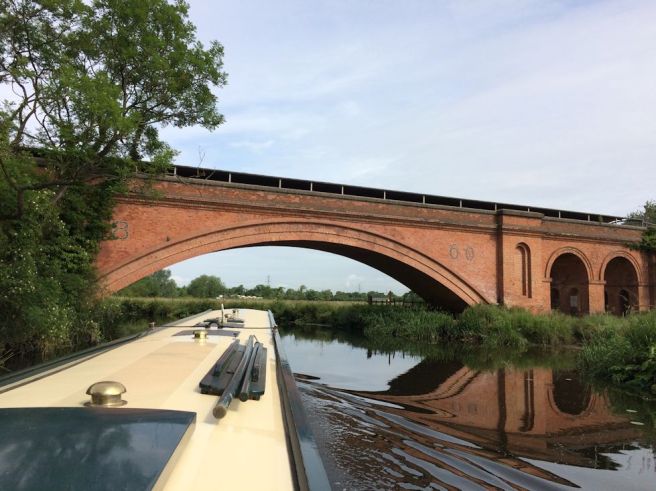 I began the return journey, feeling remarkably chipper until I passed Barrow, when it began to seem an awfully long way.  And no wonder!  When I got home and measured the distance on mapmywalk

I decided on a gentler walk today.  Since I missed out on Swithland the other day I decided to drive there just to make sure it couldn’t escape.  I parked up at the end of the village and walked towards the reservoir.  It’s a very atmospheric view across the water to the mysterious old bridge where once an hour the steam trains pause a while so that passengers can see the reservoir.

Sadly you can’t walk around the water as it’s all parcelled up by Severn Trent, so that’s the best view you get of it.  I carried on through the outskirts of Rothley to the Mountsorrel turning and decided I’d go down into the village.  At this point I was hit by a problem I hadn’t experienced in the hot weather – the need to pee.  And this is where the sheewee comes in, because as everyone knows it’s very inconvenient, not to say risky, if you have to lower your garments and squat in order to pee: men have it much easier as all they have to do is lean casually on a telegraph pole or something and just pretend to be taking a phone call.  But!  help is at hand, for OH has ordered me a shewee, a little funnelly thing which gathers all the liquid and points it in one direction so that you can pee standing up.  I’m very excited about this as I’ve always wanted one, though I suspect I’ll have to practise a bit when it comes.  I’ll keep you posted (I’ll spare you the details.)

I had my lunch on the banks of the canal:

and then retraced my steps, discovering a new – I don’t know what you’d call it – a bright yellow expanse of heritagey-type-stuff.  Anyway, there was a cafe which was full of families, a nature trail and a miniature railway and the whole thing seemed to be on the site of an old granite mine (quarrying being a key industry in the area going back to the 18th century: Swithland is known for its slate mines.)

And so back once more through the intermittent rain to where faithful old Bertie was waiting.

Oh, and the decommissioning of Trident was a CND idea from years ago.  Trident was actually built in Barrow-in-Furness so as a symbolic act we took a model of Trident made out of cardboard to Barrow-on-Soar and ‘decommissioned’ it.  On the way people were starting to get sheepish and by the time we got there, mutterings of ‘I don’t know why we’re doing this’ could be heard.  But we did it.