My legs were in recalcitrant mood today.  We ain’t going far, they seemed to say as I got out of the car in Cropston.  I planned to walk around the reservoir and maybe a bit further afield but the legs put their feet down and said nope, no way nohow.  No siree.  Jus’ round the reservoir an’ that’s all (for some reason my legs have a Southern US accent, don’t ask me why.)  When you stop to think about it your legs do an awful lot: I was noticing how quickly they bend and straighten, locking the knee every second or so, and that’s at around three miles per hour.  And they do it over and over without complaining – until one day they’ve just had enough.  Well, I respect my legs, so I said OK then, round the reservoir it is.  And it was.  The path leads on from a tiny cul-de-sac at the top of Cropston village and winds through fields towards the reservoir.  I walked through acres of broad beans which had been burnt: this made me very sad as they were probably destroyed due to their small size – I split open a pod and saw some small and very sad beans inside.  Mine haven’t done much better: after producing a few decent pods they were hit by the drought and gave up the ghost.  Tomatoes have been good though… but I digress.  After a while the path seems to give up trying to find the reservoir and instead leads into Bradgate Park with a nice view of Lady Jane Grey’s house.

It was time for a sit down and a cup of tea.  Alas, the stag I’d been admiring for a while decided to come and stand right behind my bench, causing all the passers-by to crowd round taking photos. 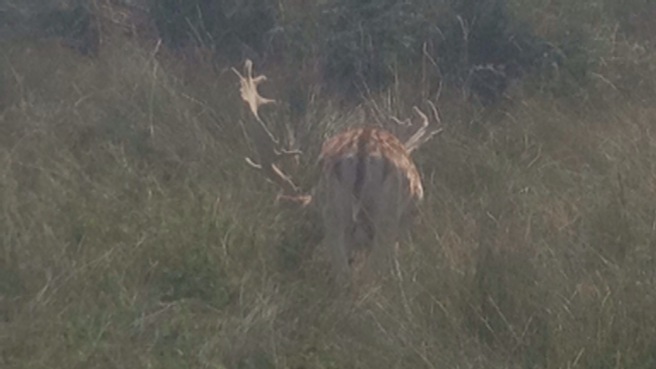 I decamped a little to a pillar-box viewing point by the other side of the reservoir from where I took this photo as I had my tea:

The view of the reservoir from the other side is very pretty; though you can’t actually get to the water you can get close enough to look at the birds.  After lunch and a rest I continued to the road which cuts across the head of the water, and so back to Cropston.  Not much of a walk but enjoyable.

Tomorrow I shall mostly be… resting.