Today I definitely wanted a shorter walk.  A very short walk.  A walk that says, I’ve more or less given up but the bug hasn’t quite left me yet.  So I decided to drive to Normanton on Soar and walk to Zouch (pronounced Zosh) which coincidentally was the bit of the canal I’d left out before.  Turns out the tow-path has also left out this bit because you can’t follow the water but have instead to go to the end of the village and then across the fields.  The cows were quite friendly and as the pub hove into view

(the same one I went to in a state of melting a couple of weeks ago and encountered two men trying to turn a boat round) the thought of tea came into my mind.  I went in and asked.  Did they do tea?  They did.  Did they have soya milk?  They did not.  I settled for cows’ milk and wished I hadn’t bothered as the tea was horrid.  I also noticed that the pub was a bit dirty and the tables hadn’t been wiped.  Ah well.  I made the best of it and wrote my diary for a bit (one must always have something sensational to write in the pub) before heading back.  I walked through the village of Normanton

and out the other side, passing the 12th Century church and the pub (where I should have gone for tea) and having an interesting conversation with the woman who used to run the chain ferry: 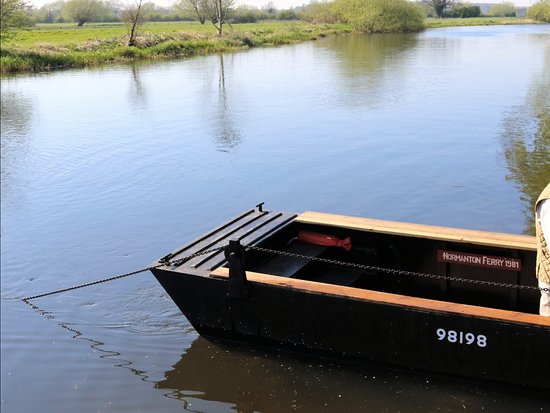 and still lives in what used to be the tied cottage.  She, her husband and her son ran the ferry between them and she said it could be quite inconvenient if you were in the middle of baking and somebody came down wanting to cross over.  Beside the chain ferry cottage are some delightful chalets like the ones in Swithland Wood.

At the end of the village I turned and walked back through the fields along an alarmingly narrow path through alarmingly tall sweetcorn, having nightmares about being harvested by a huge combine, and so back to the churchyard where a bench looks out over the river and I had my lunch.

After that it was time to head home.