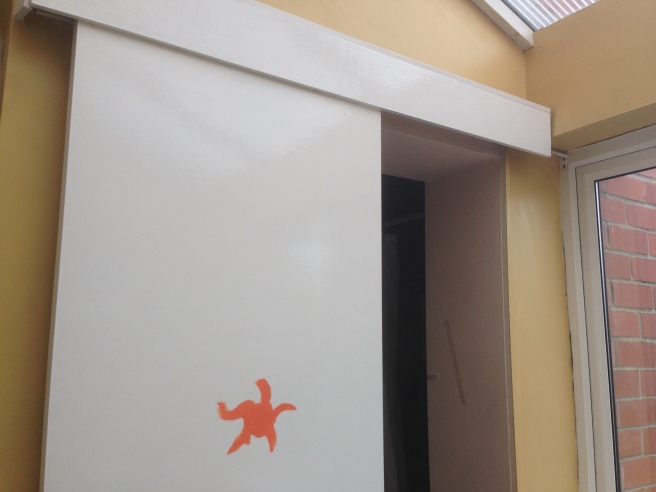 It’s been an entire week since I posted but I’ve got a note to excuse me in the shape of the photo above, because I’ve been decorating a part of our house which a friend eloquently christened the Futility Room.  It’s a good name because the futility room houses the washing machine in which we wash clothes which then get dirty again faster than you can say Nicky Morgan (why Nicky Morgan?  I’ll get to that…)  Anyway, the futility room was horrid; covered in peeling and faded dusky pink paint with large blooms of black mould all over.  It was not a pleasure to go in there.  So over the previous weeks I’ve set about cleaning, unmoulding, stain blocking and painting.  And then as you can see I’ve been creative – so the futility room is a delightful shade of sunset yellow with some strategically placed orange suns.

So much for the futility room.  And then there’s Friday Room which on Friday was addressed by local MP Nicky Morgan on the subject of Brexit.  It was interesting on various levels, not least to observe her skill in working the room.  She charmed people with a mixture of genuine conviction and carefully placed suggestion and I was left with the thought that the two were woven together absolutely seamlessly.  You can’t help admiring that in a politician even as you deplore it: Morgan will be a formidable enemy and a hard person to dislodge in an election.  Otherwise it was an interesting, wide-ranging and, as is usual with Friday Room, respectful discussion, even if we didn’t learn much about Nicky Morgan’s views on the way forward.  She is a passionate remainer who believes the referendum result should stand though we ought to have a parliamentary vote on the final deal.  She thinks we should stay in EFTA (the European Free Trade Association) otherwise the discussion was mostly about the past; the mistake of not setting rules about referendums in general including a threshold for making major changes; the reasons which led to the vote being as it is and her desire to represent all her constituents (I have a certain amount of scepticism about her ability to represent me, as she keeps voting for public sector cuts and renewing Trident.)

And that is a story of two rooms.

I started my first novel, aged 8, in a draughty vicarage, finishing it 14 years later. My first poem emerged on a Sussex beach in 1965, but I didn’t return to poetry until 2007: I’m still trying to find out why. I have published short stories, poems and reviews and am a recognised performance poet. I’ve been married 21 years and have two children, Holly, 20 and Daniel, 17; but my husband now wants to be known as female. My struggles with this and its effects on my writing, are the springboard for these Mslexia blog-posts. View all posts by Sarada Gray