Sometimes life can seem like a merry-go-round.  I don’t mean that it’s horribly busy, though it is for many people; what I mean is that insights which are very clear one moment can be lost in the next, and only recovered when you ‘come round’ to them again.  Life seems to swoop like a waltzer-ride, causing us to lurch from one reality to another, one set of people to another, one lot of viewpoints to another.  In a globalised world where values are relative and every second person you meet has a different outlook, it’s hard to know exactly what and where you are.  The temptation is to build a wall of prejudices and lob missiles over the top.

Enough with the metaphors.  It came to me today that since I blogged about it a few months ago, I haven’t really practised santosh much.  I’ve thought about it fleetingly, as a face glimpsed fleetingly from a bus (is that another metaphor?) but decided, for whatever reason, not to go there.  But today it has come to me that I need this more than ever.

So let’s skip the what and the why, since those are dealt with in that previous post, and go straight to the how.  How precisely is one supposed to practise this thing?  Can you download a course?  Are there exercises?  Well, perhaps; but my method is to begin by reminding myself of what I’m practising, often just by simply repeating mentally the word santosh.  It’s about noticing when the mind gets a little manic; when there’s a tendency to be perfectionist and to practise end-gaining, and telling yourself: Wait.  Practise santosh.  Be content.

In addition you can bring this awareness to everything you do.  For example, this morning I decided to vacuum the living-room.  There wasn’t time to do it ‘properly’ so instead of feeling dissatisfied and making a mental note to go over it again soon, I decided to be content.

But how do you be content?  If it doesn’t come easily to you this can seem like an inaccessible mountain.  There are some good suggestions in this blog including practising gratitude and not being judgmental.  As Paul McKenna points out in ‘I Can Make You Rich’ there’s no point in being a millionaire if it just makes you want even more money: he calls this ‘wealth dysmorphia’, a very apt phrase.  It’s a hard lesson to learn, particularly when there’s something you want very badly, but contentment doesn’t mean resignation.  It doesn’t mean accepting that you’ll never have whatever-it-is; just accepting that right here and now you don’t have it: it’s the spiritual equivalent of geo-positioning:* knowing where you are.  Because if you don’t start from here, where can you start from?  So every time I look at the garden and think about what’s left to be done; every time I look at the washing-up, every time I consider that I am still not celebrated as a writer, I tell myself ‘I am content.  I am content.  I am content.’

And for your own contemplation here’s an OM symbol inside a mandala: 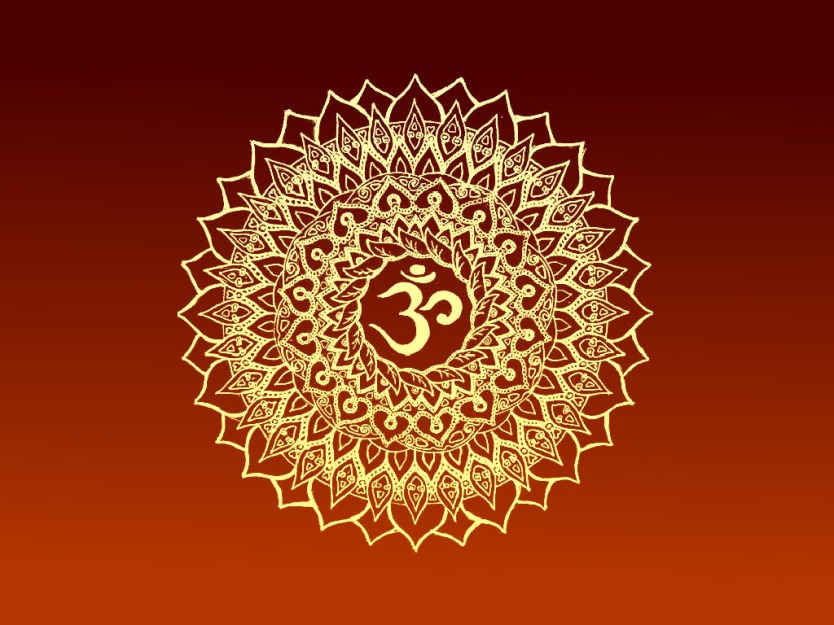 I am going to get around to blogging about the McKenna book, I just haven’t got to it yet (I am very content with this…)

*I would call it ‘ego-positioning’ which would be nicely anagrammatical, except that it’s not about the ego.

I started my first novel, aged 8, in a draughty vicarage, finishing it 14 years later. My first poem emerged on a Sussex beach in 1965, but I didn’t return to poetry until 2007: I’m still trying to find out why. I have published short stories, poems and reviews and am a recognised performance poet. I’ve been married 21 years and have two children, Holly, 20 and Daniel, 17; but my husband now wants to be known as female. My struggles with this and its effects on my writing, are the springboard for these Mslexia blog-posts. View all posts by Sarada Gray

One thought on “Today I Shall Be Mostly Practising…”